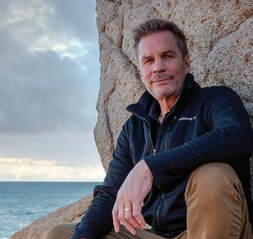 ​In 1977, eighteen-year-old Steve Bell packed his rucksack and hitchhiked from his seaside home in England to go climbing in the French alps. Despite nearly dying in a fall, the trip was the beginning of a life-long association with mountains which would take him to the top of all seven continents. His varied career included working for the British Antarctic Survey, completing a commission in the Royal Marines, and becoming a trail-breaking high-altitude mountain guide. He was the first Briton to lead paying clients to the summit of Everest, and founded the renowned mountaineering company, Jagged Globe.
The author of two books, Steve emigrated to Australia in 2004 and travels the country as a motivational and keynote speaker. His writing is exercised by the maintenance of a blog and works-in-progress for a memoir and a novel. Married to the artist, Rossy Reeves, he enjoys life at low-altitude in Chiton, only four rope-lengths from the sea.
Steve's website: www.stevebellwords.com.au 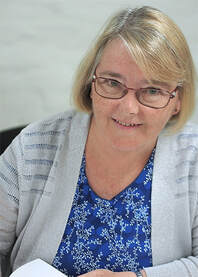 ​Margaret spent a nomadic childhood in England, Scotland and Ireland, before migrating to South Australia and experiencing the culture shock of a migrant hostel and Adelaide tap water in the early 1960’s. Her first career found her in one-teacher schools, remote Aboriginal Communities, Special Education and Adult Literacy. Marriage and motherhood followed, before retraining in Architectural Drafting, working for Charles Darwin University and later in her own business, Centreline Drafting and Design in Central Australia.
​Writing has long been her hobby and therapy. She first found her voice in poetry and short stories in a writing group in Alice Springs and on moving to South Australia led a creative writing group at the Jack Young Centre in Salisbury, spent many year on the committee of the Salisbury Writers’ Festival and served as Secretary and Editor for Friendly Street Poets.

Since her move to Goolwa two and half years ago she has been welcomed into the fold of Sand Writers. Her poetry has been published in many anthologies and Christian magazines, and has been adapted as hymns and meditations. Two books of her poetry, Frayed Edges and Pilgrim or Tourist? were published by Ginninderra Press in 2016 and 2018. Her third book Till We Dance Together was self published and proved a productive use of enforced quiet time during Covid lockdowns in 2020. Now retired and grandmother of seven, Margaret juggles her time between family, art, volunteering, church, garden, long lunches with friends and her writing group. Occasionally she still finds time to write. 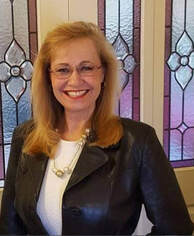 I am of British and Irish descent, and the Blarney spills through me from childhood tales, coloured-in; daily anecdotes, wrung-out; and the hilarity of living with beasts in mammoth proportions.
​
Cradled as I am within a valley of whispering trees where secrets blow in from the sea, writing is now my way of life.

​I have a devoted husband and supportive family. Their love fills my writing. There is little room for negativity in a life filled with joy like mine.

During my early career, I was involved in the dairying industry as a Butter maker. I changed to work in the oil and gas industry within the Safety and Emergency sectors.  I was fortunate to have been exposed, in many ways, to many worksites. I wrote and developed many technical documents, including Emergency and Security Plans for many refining sites.  These diverse backgrounds have provided valuable experience for my writing. My retirement has provided time to pursue my passion for writing and researching critical historical aspects of my books. Belonging to several writers’ groups, I have had many short stories and poetry published in group anthologies. In 2018 I published a biography, Blue Water Warriors, based on Marsden Hordern, a World War 11 Naval Officer and navigator, who sailed in many of the Sydney to Hobart yacht races. His first race was in 1947, two years after the inception of the annual event.
The KGB’s Genius of Illusions is the first book of a series involving Soviet espionage during the space race and  follows a chronological timeline.  The next books in the series, the KGB’s Master of Illusions and the KGB’s Maven of Illusions have been completed, with manuscript finalisation required. The KGB’s Maestro of Illusions is currently being penned and is approximately 30% complete.
I am a member of the Australian Society of Authors and Writers SA. 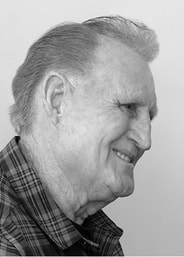 ​Warren “Rocky Porter is a compelling storyteller whose writings about his incarcerated institutional childhood represent a significant piece of Australian social history. He’s a survivor of horrific institutional abuse.  Despite this hell is he is extraordinarily positive, creative and endearing. He nurtures others. Each story about his fourteen years of incarceration is told with surges of generosity, accompanied by a sense of loss.  His two books A Tormented Life – Institutional Brutality in Australia, and his epic book Brutalised -Institutional Abuse in Australia tells the shocking truth about a shameful episode in Australia’s history. Warren’s books and his advocacy for those who throughout their childhood were abused preceded the 2013 Royal Commission into Institutional Responses to Child Sexual and Physical Abuse.

Warren continues to write about and support his many friends who were traumatised during their institutional childhood. Yet he bubbles up fountain like with enthusiasm when talking about the mateship that throughout his institutional life sustained him. He tells how when walking on Goolwa beach in silence often he imagines he can hear the voices of old mates from institutional days  and that’s rewarding, he says. His writing about his experiences during institutionalisation and beyond is tender, and full of personal warmth, courage and compassion. Often his stories are full of mischief as in his most enjoyable Ballarat Boarding House story. There are simple stories about the nature of love in his story Mrs Wilder and in his Sand Writers’ SA Governor’s award winning story A Place Not Home.  His resonant stories of life on and across the Nullarbor are fluent, humourous and sensual. Warren Porter’s writing is defined by its depth, by his delightful irreverence and by his attention to the underpinning social events and standards practiced for children who were Wards of State. 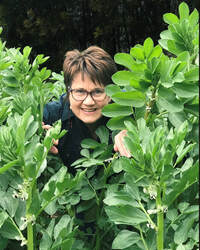 ​Growing up in the Yarra Valley, famous for its agricultural diversity and quality produce, Kate Punshon was inspired by the terroir of the land and a life-time love affair with food was born. A successful career as a restauranteur for 18 years with her husband with multiple industry awards, studying confiserie in France, promoting Australian food in Hong Kong, and working as an food educator for the Jamie Oliver Ministry of Food program and in the retail sector, food has always been the axis of her life. She now shares a smorgasbord of botanical and culinary stories and quest to understand our foodscape food through her website www.rootsrecipesandreasons.com.au,  instagram rootsrecipesreasons, and food journals.

​Roger Rees is an Emeritus Professor of Disability Research, in the School of Medicine at Flinders University, whose principal focus of his clinical practice has been on brain injury, neurological disorders and working with people with HIV/AIDS.
​A widely published journalist & author, in his new book No Turning Back Rees turns his focus to Ethiopia; the health issues faced by millions of its people, the plight of the most vulnerable in the community and the political events and cultural realities that many of us choose to remain unaware of in our comfortable lives half way across the world. 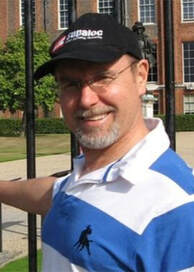 ​John grew up on a wheat and sheep farm on South Australia’s Eyre Peninsula. After leaving school as soon as allowed, he worked in a range of occupations from jackaroo on a Northern Territory cattle station, to factory hand at Holden’s Elizabeth plant. The drudgery of this last was a big wake-up call and he fled to Africa and the Americas before heading back to school.
He has always been an avid reader and took up English and History teaching after university study. His first published writing achievement came with several short stories in Woman’s Day. From this encouragement he began entering writing competitions and over the years has had success, mainly in short story competitions, but also in the occasional poetry competition. He enjoys the short story form as it provides a sense of completion, as well as the challenge of creating meaning in a limited word count.
​
His short story anthology, Little Islands, was published in 2018 by Ginninderra Press. Completing a novel is his current writing goal. John lives on South Australia’s Fleurieu Peninsula.

​Dr Lindy Warrell is a retired anthropologist who specialised in the area of myth, ritual and religion, with a focus on South Asia. After lecturing at Adelaide University for several years, she consulted with Indigenous people across Australia on land entitlement matters, family histories and in the Indigenous health sector.
As a poet, Lindy writes in free verse about the outback, city life, old age, random moments and disturbing things. She has published three chapbooks and is the founding member of TramsEnd Poets in Glenelg.
Her first novel, On Gidgee Plains, set in the outback of South Australia in the early 1960s is forthcoming.
​
Lindy's Website: https://www.wattletales.com.au
TramsEnd Poets on Facebook: https://www.facebook.com/TramsEnd/?view_public_for=2344956522390720

Heather and her family grow wine grapes and make wine in Langhorne Creek, one of South Australia’s premium wine regions. She enjoys growing and preserving things to eat, writing, reading, sharing good wine with friends and wishes she could play better tennis.
She  has served on national and state boards for the wine industry. Her previous ventures include successful careers in librarianship, science with CSIRO and as the head of the public transport agency in South Australia. She has degrees in science, librarianship and business which she now uses to raise money for writing groups, historic buildings, river and landscape restoration.
Heather has written a novel with the working title A Portrait of Revenge which has not yet found a publisher. Her poems reflect her love of nature informed by her scientific background. She is currently obsessed by the elements in the periodic table and has completed an exploration of the history and uses of each element in poetic form.
Facebook -Heather Webster Writer
Instagram WindSongWineslc